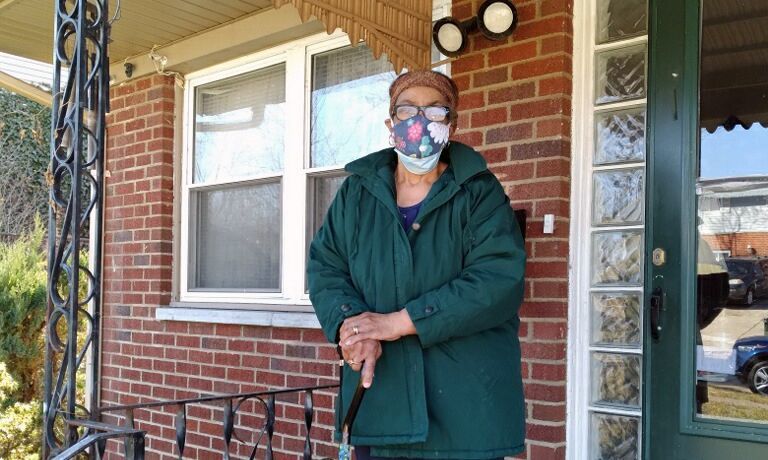 A vital Habitat for Humanity of Greater Dayton service that isn’t as widely recognized as our trademark homeownership initiative is our blossoming Critical Repair Program. But thanks in part to a wildly successful partnership with CenterPoint Energy, that is quickly changing. Dozens of grateful elderly neighbors are already benefitting from it, all are more likely to “age in place” thanks to our repairs.

Our Critical Repair Program is an extension of our mission to build strength, stability, and self-reliance through shelter. The program enables residents, most of them elderly with fixed incomes, to age in place by performing critical repairs. Without Dayton Habitat these seniors would otherwise be financially and/or physically unable to have the work done. These repairs make their home safe and more livable, so they can stay in the home they’ve spent a good portion of their life keeping and maintaining.

CenterPoint Energy granted $300,000 to our Habitat affiliate to be used $100,000 annually over three years. The funding has been a big shot in the arm for the repair program.

“It has been a great two years so far, and we’re getting ready to go into the third year,” said Habitat Development Director Dave Mauch. “They have helped out a ton of people through this partnership. We hope to continue the partnership after this year.

“When we first got the partnership started, it was, ‘Here’s some money, go and do good things and help people,’” he added. “Then right after that, the (Memorial Day 2019) tornados hit, things changed overnight. That funding became focused on both critical and tornado repairs.”

CenterPoint has funded 20 critical repair projects over the last 12 months. Federal block grant funding took care of some of the tornado repair expenses as well.

“We are big fans of Habitat and fund them all across our footprint,” said Amanda Schmidt, CenterPoint’s Foundation President/Community Relations. “We see a lot of value in what Habitat does. One of our core giving priorities is affordable housing, and particularly homeownership that has people moving towards wealth accumulation. Habitat does such a good job of putting them into a safe, affordable home that they can handle.

“We’ve got great relationships with Habitat, to the point where they ask for our advice on things,” she continued. “So the homes are not just affordable, but appealing and attractive and easy to maintain.”

Amanda estimated that CenterPoint has similar partnerships with “close to a dozen Habitat chapters” as it has expanded its footprint to eight states. Community vitality (which includes affordable housing, neighborhood revitalization, quality of life planning) and education are two of its main priorities.

“They do a lot in the community, and they’ve always supported us with something, for example large sponsorships for our annual gala,” said Dave. “We had a meeting with them and asked, ‘Are you partnering with Habitat in other places?’ And that’s how we found out about the Muncie, Ind. partnership, and we asked if we could do something like that here. The rest is history.”

That involvement has grown our Critical Repair Program to the point that it is the largest it has been to date.

“It was still fairly in its infancy,” Dave said. “But we try to keep our ear to the ground about things happening across the country and we were hearing a lot of other affiliates were doing critical repairs. At first, we were doing maybe three or less repairs per year. Then the tornados hit and we said, ‘We have to be involved in this. We just can’t sit on the sidelines when our neighbors need our help.’”

“They helped us to ramp up quickly and it has really spread, basically through word of mouth,” Dave said. “Having the partnership in place with CenterPoint allowed us to get the help where it was needed more quickly and gave us stability in the program, helping us to take it to the next level.

“It really touches my heart that we are one of the few Habitat affiliates who is interested in being in that space, because it is so needed,” he added. “You could slash out about 70 percent of the critical repair projects we’ve done if not for CenterPoint.”

Walt Hibner, CenterPoint’s Ohio Local and Government Affairs Manager the past six years, has a long history of working with Habitat, including as a volunteer on board committees and construction sites.

“I’ve always appreciated the mission of Habitat,” Walt said. “It has done a lot in the community. We sought them out for the tornado repairs knowing they do such a great job.”

Walt recalled one tornado recovery effort in Trotwood involving a young lady who was in an apartment with her son that was destroyed.

“I worked on that project, and it was so satisfying to see the keys turned over to her,” he said. “Now she’s going to have equity in a home instead of just paying rent and has something to take pride in and maintain. There’s such a big difference, and Habitat makes that happen. The thing about responsibility is it makes you a better person.”

Former board member and CenterPoint employee Keith Thomas was also “incredibly instrumental as far as telling our story to CenterPoint and getting them excited about our work,” according to Dave. Added Walt, “Keith (who has since transferred to Oklahoma) was a really hands-on leader. He could really recruit the volunteers!”

This all bodes well for the future.

“I think we’re always interested in continuing our involvement with our Habitat partners,” said Amanda. “They are an important partner when you look at it from the utility and housing perspective.”