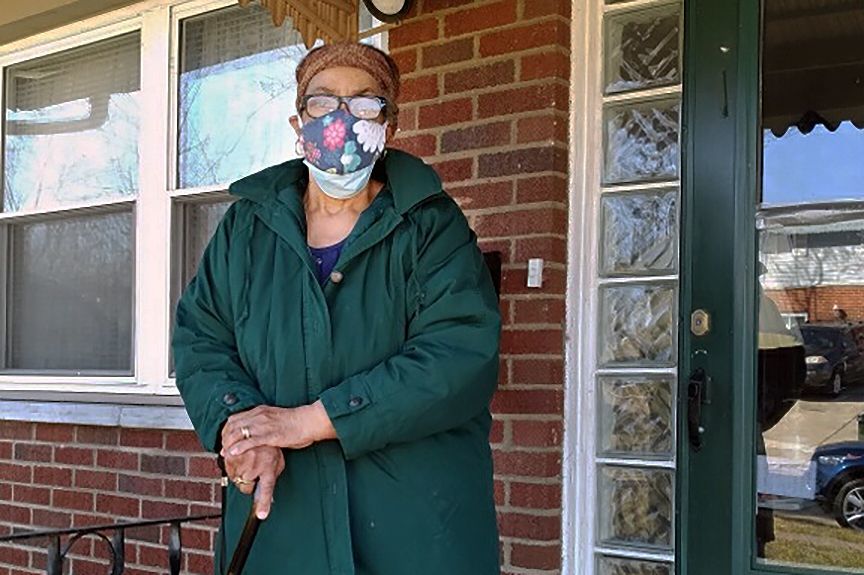 As one might imagine, life has been hard for Trotwood’s Prudence Coleman since losing her husband to cancer 10 years ago. But no year has been harder for the 70-year-old widow than this last one.

“2020 has been a really bad year for us,” she said. “I lost my son in July; he was murdered. Some of my family got sick with COVID. My daughter had to take me to the hospital three times after I fell on the cold kitchen floor trying to heat up water. So it was very rough for us.”

To top it all off, Coleman has had to endure these trials the past two winters in a cold home.

“I’ve been without heat for about two years, and the hot water had been out two years also. I guess it was bad karma or something,” she said. “I didn’t know who to call, and the people I was able to reach didn’t have any funds left. The blessing has been the people at Habitat for Humanity of Greater Dayton.”

In fact, her son had just been hired by Amazon. But two days before he was to start, he was killed.

Habitat for Humanity of Greater Dayton Neighborhood Repair Specialist Galen Curry recognized the seriousness of her situation right away. Our organization was able to respond quickly, hiring contractors to install a new furnace and hot water heater as it would have taken too long to get the proper specially qualified volunteers rounded up to do the work.

“She told me, ‘I'd have been in the hospital right now if it weren't for you guys,’ ” he said. “She had space heaters all around her house. They were her only source of heat, so they’d run all the time. If a fire would have broken out in there, it would have been really bad for her.”

Coleman, who was boiling what hot water she had on the stove and also heating her home with her oven, said she didn’t realize the danger of the situation until it was almost too late.

“I almost burned down the house with my electric heaters,” she recalled. “I guess I had too many things plugged into one of those power strips. The heater looked like it was about to catch fire; it was turning brown. It had smoke coming from the thing.”

Watching what folks in Texas went through recently, when a rare winter storm paralyzed part of the state by knocking out electric and water supplies, made Coleman feel even more fortunate.

“I could see myself in their position and feel the pain of what they were going through,” she said. “I’ve been so blessed.”

It was a current family connection that led Coleman to that blessing.

“My daughter had bought a house several years ago through Dayton Habitat, and she told me, ‘I heard about a program Habitat had for seniors,’ ” she said. “So she brought me the application and I filled it out. It was such a blessing.

On a fixed income and unable to afford the repairs, Coleman found out about Habitat of Greater Dayton’s critical repair program through her daughter, who had purchased a Habitat home years earlier. “I’m still shocked that it even happened,” she said.

In fact, she wondered if she could even get help from Dayton Habitat. “I told her, one thing for sure is if you don't (apply), the work won't get done," Curry said.

Coleman shared that she didn’t want to put a burden on her kids or grandkids. But she finally told her daughter and “if my daughter hadn’t told me about Habitat, I’d still be freezing right now.”

The past year has surely been a test of her faith.

“With my husband being clergy and my parents always teaching me the ways of the Lord, I just held onto to Him,” she said. “They always said, ‘We don’t know why, only He knows why.’ Without knowing the Lord, I don’t know how I would have gotten through all of this. If I didn’t trust Him, I don’t know where I would be.”

“I was glad we were able to go out there and help her,” Curry said. “It was a blessing to be able to help her. She's a survivor.”

Coleman is one of 29 families that Habitat has been able to serve through a $300,000 grant from CenterPoint Energy’s Vectren Foundation, received in 2019 for Memorial Day tornado repair. It has been a long-time supporter of our chapter.

“We are proud to be able to help our community in challenging times like these,” said Richard Leger, Vice President of Natural Gas Distribution, Indiana and Ohio. “Community involvement is one of our core values.”